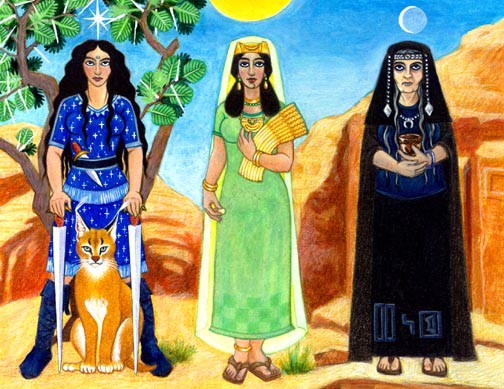 Three figures stand facing us. The figure to the left wears a blue dress spangled with stars, and stands holding two swords, which they rest on either side of a desert lynx, which sits at their feet. A star blazes above their head. In the middle, wearing green, a gold crown and holding golden grain, stands a second figure. The sun shines directly above their head. To the right, dressed in black, stands the third figure. They are holding a cup, and the crescent moon hangs above them. Credit: Al-Uzza, Allat and Manat, the Arabic Triple Goddesses by Thalia Took. Reproduced with permission from the artist.