On being Queer and Muslim: Why Noon Festival Matters | JEEM
Skip to main content 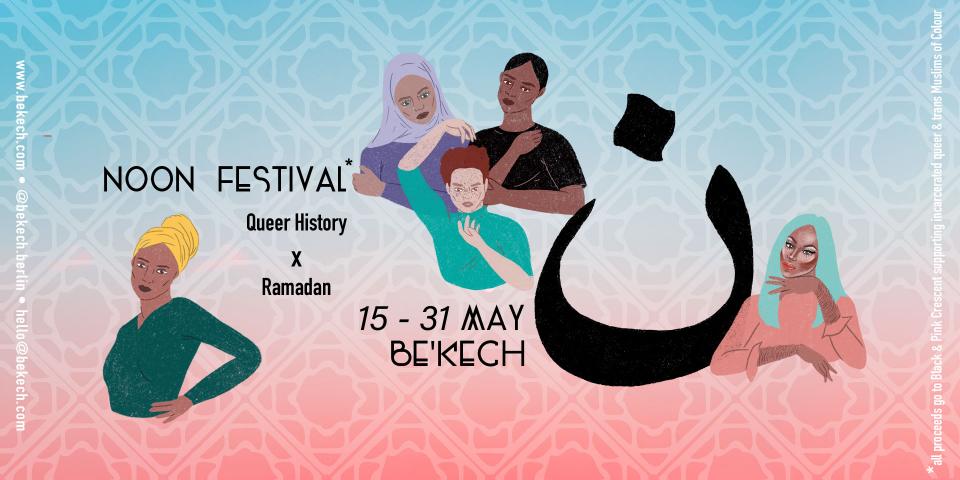 Our very existence is a form of resistance to the rampant increase of Islamophobia, queerphobia and multiple other components of far-right political rhetoric.

There was a substantial period in my formative years where I felt that I existed very tentatively within a binary of gender, sexuality and faith – all distinctive features of my identity that felt like they were at conflict with each other almost all of the time. I remember when I was sixteen years old, I would feel like an imposter entering into a religious space – whether as a tourist in the memorialised mosques of Istanbul’s Sultanahmet district, or in the Ziyaras located off of the village roads near Arsuz (Hatay) in the summers when I visited my family – possessing mixed feelings of belonging and dis-belonging.

I think I began to rid myself of this conflict and complexity of being an imposter when I reached my early twenties, cultivating around me a community of friends and activists who were, like me, queer and of colour – some of whom also being of faith. I realised that this static binary of having to identify as either/or was merely a consequence of this compulsion in capitalism to package, label and export all forms of identity in a certain manner. A routine attempt to create an authority on how one is capable of existing in order to repress any existential fluidity that challenges the , patriarchy, heteronormativity and white supremacy. Being genderqueer, pursuing relationships with men and simultaneously being of faith no longer had to exist as separate identities as I began to decolonise my mind, and I learned (am continuing to learn) to embrace the idea that one can find mutuality in one’s many identities.

Community. That was the main thing that pushed me to accept and represent myself and also strive to ensure that others feel accepted and represented too, the desire to create and maintain a community of care. This is the aim of Noon Festival, specifically myself (as co-curator), Nina Martin and Louna Sbou (be’kech co-founders and co-organisers of the festival). In Berlin, migrant identity, Muslim identity and queer identity form such an integral feature within the city’s social, political and cultural climate and architecture, but the former two are frequently weaponised as the antithesis to German identity, and the latter depoliticised and commercialised – leaving in its wake a domesticated shell of a community where a 72-hour party at ******** makes (some) people think that we’ve achieved sexual and gendered liberty. Keeping in mind that Berlin is regarded as one of the global gay party capitals in the world, with events at venues such as Berghain regularly lasting from the beginning until the end of the weekend. Many see the city as a 'LGBT haven', resulting from the hedonistic nature of the city's social and cultural architecture. Nonetheless, issues of racism, transphobia, misogyny and a growing anti-migrant rhetoric across the country, has doubted the integrity of this statement for many minority communities - something that will be thoroughly explored with the events held as part of Noon Festival!

So Noon Festival aims to draw attention away from this simultaneous weaponization and political sanitisation that we see occurring, instead bringing together a collective of outstanding queer and of colour artists, activists and performers that aim to shed light on how intersectionality and coalition amongst marginalised communities is the fundamental way forward. Taking place over Queer History Month and the Holy Month of Ramadan, all donations raised from the events of this festival will go towards supporting Masjid al-Rabia’s Black and Pink Crescent, the only organisation in the world providing spiritual support and advocacy for incarcerated, detained and institutionalised queer and trans Muslims – direct action starts with global empathy, and one of the biggest barriers to achieving global liberty is the prison industrial complex.

Over the course of fifteen days, there will be a number of different events that will take place: talks, drag performances, a queer Iftar (breaking of the Muslim fast), and an open discussion on intersectionality in club/performance spaces, to name a few. Everyone involved in the organisation and delivery of the festival is contributing on a voluntary basis, and we will be collecting donations that will be put together and sent to Masjid al-Rabia for their programme. Our very existence is a form of resistance to the rampant increase of Islamophobia, queerphobia and multiple other components of far-right political rhetoric within Europe (and beyond). This festival aims to celebrate that existential resistance, and in the process crowdsource support for an organisation that is the only one of its kind providing advocacy for some of the most marginalised members of our queer community.

A bit about the organisers

Erkan Affan is a queer writer and independent activist of colour based between the UK and Germany. With an academic background in Middle Eastern politics, gender and migration, Erkan’s research has focused notably on the experiences of advocacy and transnational solidarity for queer migrants in Berlin, and more recently on the marginalisation of transgender women from discourses of gender mainstreaming in UNHCR identification- protection policies. An avid believer in decolonising the contemporary structures of knowledge, they are currently conducting a residency at be’kech in Berlin – funded by the European Commission – and curating a series of events that provide more opportunities for self-representation regarding minority identity through dialogue and discussion.

Be’kech is a cultural, community and co-working space serving its Wedding neighbourhood in central Berlin. The space was co-founded in 2017 by Louna Sbou and Nina Martin to be a space where people can eat, work and grow together – a collaborative hub that creates positive societal impact. Louna, a serial entrepreneur, music booker and consultant and Nina, a social entrepreneur, designer fundraiser, started this organisation with the vision of providing a space for and with local communities – especially LGBTQIA+ folks, the Arab and Muslim diaspora, BPOC and others.