Un/learning Masculinity in the Diaspora | JEEM
Skip to main content 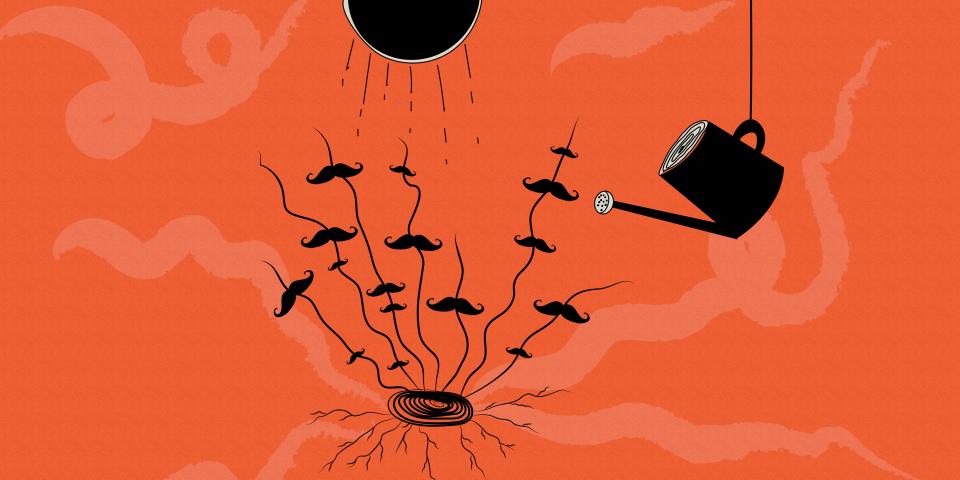 Un/learning Masculinity in the Diaspora

Having grown up and lived in multiple cities across Europe since my childhood – most notably in neighbourhoods with a strong West Asian diasporic presence – I have noticed that the masculinity I navigate the most is that of my own cultures.

As a West Asian writer born and raised in the diaspora, I’ve become accustomed to reading dozens of articles that explore the “conflict between two worlds” in the diaspora; specifically the “Middle East1” and “the West”. Whilst these pieces might provide some insight into the interactions between both, many fall victim to the belief that they are two totally divided arenas of existence and neglect the legacy of colonialism and the complex history of migration that have bound them together over centuries. For example, how have these interactions impacted diasporic identity both on the individual and the collective level? Analysing West Asian diasporic masculinity can provide a useful lens with which to explore some of these questions in more detail, and I do this here with reference to my own experiences.

Having come to terms with my sexuality at age sixteen, I thought that I’d already ‘done the work’ of unpacking who I was vis-à-vis society’s labels: a young, gay, effeminate male. I was wrong, realising later that I had only scratched the surface by this point. Up until the age of eighteen, I believed that I was a cisgender male. I would hold myself, uncritically, to the standards of masculinity that I would see among the men in my family, repressing the discomfort I felt about my inability to follow what seemed like such a strict code of conduct. Perhaps the first time I started to critically question my gender identity was when I came into contact with drag culture. Not the commercial, hyperfeminine drag of RuPaul and its toxic fanbase, but rather the beautifully imperfect drag culture of the real world that blurs the gender binary as a way to challenge established power dynamics rather than create profitable brands. I would watch as talented performers would subvert the very rules of masculinity with which I policed myself, dancing and lip-syncing with flawless rhythm and talent on stage.

I began realising that my own gender expression had been restricted to a trench coat with some jeans and boots, and I had an urge to expand and explore beyond this narrow performance of masculinity. So I started reading articles and books by radical queer thinkers to understand more about the constructs of gender and the politics surrounding it, in turn leading me to seek out the communities in which I could contextualise my own struggle and learn to understand the struggles of others. This also led me to begin experimenting with items of clothing and fabrics that were marketed as “feminine”. I would wear jewellery and makeup when I visited social spaces and would allow myself to articulate a more fluid gender expression. These little experimentations made me stronger, and I gradually distanced myself from those who uncritically centred straight and/or cisgender identity as the norm in their lives; old housemates and friends from university, among others. I was happy, and I was experiencing my first encounter with what being comfortable in my own skin could really feel like.

As with every resistance however, this euphoric state was neither my sole nor my permanent state. The fear of physical harassment or assault was and is still ingrained in me. I’m in a constant state of ‘fight or flight’. The persistent need for discretion in order to navigate my family’s expectations leaves me perpetually insecure, which is not to say that my feeling of insecurity is exclusively caused by my family or diasporic community. When this sense of insecurity is heightened to an overwhelming extent - such as when I am travelling home alone from a club, or I think about the fear of being 'outed' online to family members and others in our community - I try to remember that the choices I make to define myself outside the societal expectations of masculinity may not be shared by those around me, but they certainly deserve to be respected. But respect is a complex and inconsistent experience in and of itself. When I feel safe, for instance, I am reminded that it is because those around me are allowing me to feel so – as if they could try and take this away from me at any moment. To truly feel a sense of respect, for me, is to know that these feelings of safety can never be challenged or withdrawn.

How is West Asian masculinity formed in the diaspora?

It is this tension between the empowerment and agency I achieve through my gender expression, as well as its subsequent insecurity and hypervisibility, that compels me to try to unpack what masculinity means for those around me, be that my family or the strangers with whom I interact in public.

This compels me to question how masculinity embeds itself into the lives of men in the diaspora. Like many other social constructs, masculinity is intertwined with national and ethnic identity in the diaspora. It is inherently linked to our imagined sense of (dis)belonging and our complex connections to ‘home’. When we navigate racist and Eurocentric societies, our points of reference for how we compose our identity draw on our cultural heritage to soothe the rejection we may experience in these environments. In essence, our marginalisation compels us to emphasise the values of our parents’ homes to feel acceptance; values that were passed on to us, the children ofimmigrants, who feel far away from “home” and desperately try to compensate for this.

A way to understand masculinity in the diaspora then is to understand how it both manifests in and is manifested by racism. I remember reading a text by William Safran that alleged that Arabs are unable to integrate into French society due to ‘differences in worldviews’2. On the contrary, I argue that Arab dis-integration is a result of how identities are weaponised in Western contexts to be presented as incompatible with that of the diasporic and immigrant experience. We see this in how Western nations construct themselves as holding the understanding of sexual and gender diversity in a bid to identify and then exclude the ‘Other’. Essentially, they both co-opt and commodify a rhetoric of tolerance and place Arabs as ‘Other’ to this tolerance. So, Western entities co-opt the discourse of diversity and tolerance that Jasbir Puar refers to as ‘homonationalism’3, linking the acceptance of both the spectrum of sexuality and gender identity to the successes of the nation-state. In doing so, they attempt to define themselves as superior to other nations that have not done so whilst simultaneously glossing over their own anti-LGBT discrimination and violence4. Western entities similarly commercialise sexuality and gender identity in their endeavour to capture the ‘Pink Pound’ – LGBT identity becomes an exploitable market, a commercial interest in which many brands and companies purport an alleged acceptance of diversity for the sake of increased profits. As these processes happen, and in the West’s “othering” of Arabs and various other groups, there is no mention of the long history of occupation, violence and exploitation that characterises their interactions with West Asia and other post-colonial regions. Nor is there mention of the advocacy and accountability championed by domestic LGBT and women’s rights organisations in West Asia itself. Instead, we are left with this assumption that the West and its diasporas are enlightened and tolerant, and the West Asia region and its diasporas are repressed and thus intolerant.

West Asian diasporic masculinity thus finds itself having to navigate these constructed binaries, facing the dilemma of having to side with one or the other; the ‘conflict of two worlds’ I mentioned in the introduction. Therefore, for a large number of West Asian men in the diaspora, the decision to reject Western packaging of sexual and gender diversity provides an opportunity to claim agency and independence from a system that they are similarly rejected by.

I remember in my early teens when my cousin and his friends experienced one of many interactions with a racist bouncer at the door of a club in a European city. They were apparently told that it wasn’t ‘a club for them’. My cousin’s response when I asked him the name of the club was that it didn’t matter, he said that all of them are filled with “the same posers, drunk men and effeminate clowns anyway”. Unsurprisingly this rejection meant that they never returned to said neighbourhoods to go clubbing. Instead, they went to the pre-gentrified districts located further out, particularly neighbourhoods with predominantly Turkish, Arab, African and Caribbean residents where they felt more at home and accepted. The rejection engendered a desire to return to be among “their own”, where “effeminate clowns” cannot reject them because they are not supposed to exist.

But let me be clear here: whilst West Asian men in the diaspora experience a racialisation that in turn leads to this reactive masculinity, this in no way provides a reason for the maltreatment of women and LGBTQIA+ individuals who are similarly navigating toxic hierarchies and the weaponization of identities. Our bodies are not arenas for men to exert their power insecurities onto, and men need to work to recognise the damaging power of their own reactivity. Quick.

The vicious cycle of racial exclusion I describe here is ongoing. But there is of course resistance to this in queer and trans* voices from the West Asian diaspora, be they the voices of recent, or second-generation, migrants.We form a coalition of tentative experiences, finding our place neither in the co-opted queerness we see weaponised in the West nor in the reactive masculinity we see in our diasporic communities . We don’t find ourselves in a margin between both either, but rather beyond both. Our existence challenges the cold war of ideologies fostered by nationalism, the heteropatriarchy, and capitalism . Rather, we create our own spaces that are (mostly) devoid of these nationalist sentiments and masculine complexes, instead choosing to take our identity for exactly what it is: an undefined action, rather than a rigid reaction. By doing so, we often find ourselves easily ostracised and misrepresented by various corners of society for refusing to accept the bandage of white queerness, or the bondage of West Asian masculinity.